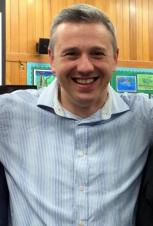 My wife and I moved to Keyworth from Radcliffe when we married way back in 2003.

After a few relatively peaceful years, in 2007 I foolishly volunteered to help create something called the Keyworth Village Plan at around the same time as the first of my four children arrived.

You will hopefully remember spending a few minutes completing a Village Plan Survey which was delivered to every Keyworth household - I remember months spent compiling questions, followed by months spent analysing results. By the end of the process I had moved from Secretary to Chair of the Village Plan group, and spent far too many hours in meetings, but met many residents from vastly different walks of life to my own - people who all shared a love of Keyworth and who I never would have met if I had not volunteered all those years ago. I also became quite proud of what a bunch of do-gooders managed to achieve as part of the Village Plan process. And I am convinced we achieved so much because residents genuinely care about what happens here and are willing to invest time and effort into ensuring Keyworth remains a great place to live.

However, something many residents clearly felt strongly about but was not getting done was the building of a Teen Park. With his Postcards Campaign, Brian Lund raised over £5,000 towards the building of a park, but we were struggling to find the remaining £120,000 we estimated we required. Potential funders suggested creating a park whose target audience would remain young people, but could be used by people of all ages - so the name was changed from 'Teen Park' to the more inclusive 'Activity Park'. Yet, even after obtaining planning permission, it looked more likely that I would be going to the park with my grandchildren than with my children!

So to move things forward, I decided to stand for election to the Parish Council, along with a few friends, as Keyworth Activity Park Champions - and thankfully, we were all voted in. Within a year after the election, with the backing of the Parish Council, I was able to secure far more funding than we needed. I trust the many people who helped create the Park will consider their efforts worthwhile. But most of all, I hope you like it.

Sadly, I had the misfortune to be born too close to Aston Villa Football Club to support anyone with more recent success. So you may spot me about the village in a Villa top - I am easy to recognise, as there are not many of us about! I also organise a couple of weekly football games, as I would far rather play football now than watch it (for obvious reasons).

You may also spot me wandering around with four children in tow. You are welcome to wave to me or even stop for a chat. But please do not feel offended if you do not get the attention you deserve - I find my children can be more than a little distracting. You can of course contact me by email where you will get my full attention (though I do not promise a speedy reply!) at CllrTomAtack@keyworthparishcouncil.org