See below some previous items from 2012, originally featured on the homepage. Please bear in mind that some of these items might have been overtaken by events.

We were shocked and deeply saddened by the sudden death on Christmas Eve of Tony Kemmer, a much respected member of the Parish Council from June 2004 until October 2009, and chairman of the Council in 2007/8 and 2008/9; it was during his time as chairman that the Keyworth Village Plan began to take shape, and it was Tony who had set the ball rolling. More recently, Tony's many and varied activities included serving as chairman of CPRE East Midlands, chairman of the Board of Trustees of Nottingham & District Citizens Advice Bureau, and a trustee of the Family Fund. Our thoughts are with Tony's wife, Sue, and his family.

At a meeting on 10th December, the Council co-opted Peter Harding as a Parish Councillor, filling a vacancy which had been outstanding for some time. Peter will serve on the Facilities committee.

Click here for more details or here for details of other Councillors.

It was good to see lots of people congregating in the village square on the evening of Friday, 7th December to celebrate Keyworth's Christmas lights.

Well done to Harriet Hayes, not yet three years old, whose design, one of six entries from Crossdale Busy Bees, was featured on the 2012 Parish Council Christmas card. There were also six entries from Keyworth Primary & Nursery School and five from Willow Brook Primary School, and, as in previous years, the overall standard was very high. Picking a winner was no easy task for the judges, and all of the entrants deserve a pat on the back for their commendable efforts.

It's become apparent from talks with local police officers that they would like to see a neighbourhood watch scheme set up to cover the whole of Keyworth, and they believe that this would make a real difference in terms of crime prevention and detection. If you would like to participate or help set up a scheme, please contact local beat officer, PC Howard Shinn by email: howard.shinn@nottinghamshire.pnn.police.uk

Residents came out in force on Saturday, 15th September, to pay tribute to Keyworth gymnast Sam Oldham, aged 19, the youngest member of the team which, in winning bronze at London 2012, became the first British men's gymnastics team to win an Olympic medal since 1912. Click here for more details and lots of photographs. 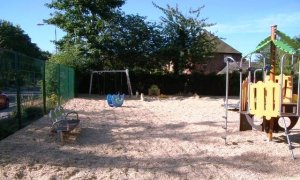 Nottingham Road Play Area was resurfaced in August, the cost being covered by a grant from the Big Lottery Fund. It's hoped that the new woodchip surface will prove to be more suitable than the grass/soil surface which has been the subject of many complaints over the years.

Congratulations to the organisers... 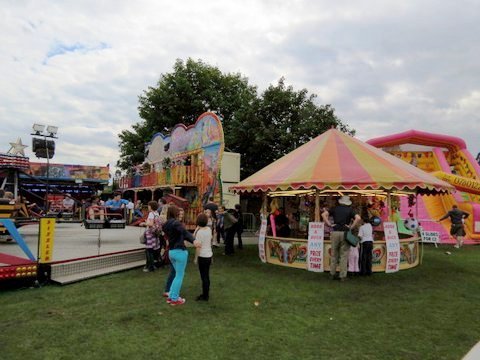 The unseasonal weather was a major headache for the organisers of the Keyworth Show which took place on 14th July. Organising an event such as this is a major undertaking at the best of times, and the heavy rainfall while preparations were underway obviously made the job even more challenging than usual. We commend all concerned for their hard work, and their determination not to let the weather stop the show going ahead. 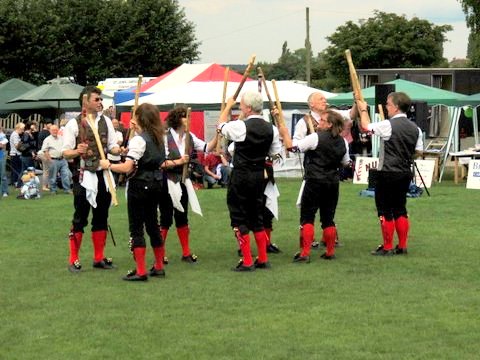 There was a brief ceremony in the square on 7th July, to dedicate commemorative plaques to the memory of Bob Hammond who died in October 2010. Parish Councillors and members of Keyworth & District Local History Society (of which Bob was a founder member) and the Rotary Club of Keyworth & Ruddington were present, as was Bob's daughter, Ruth, visiting from Denmark. The plaques are in recognition of Bob's significant contribution in researching, archiving and documenting (in a variety of publications) Keyworth's history and heritage.

Although it was cold, and rained from time to time, approximately 230 adults and 100 children attended the events which took place in and around the Village Hall on Saturday, 2nd July, and had a very enjoyable time. Some people even ate their picnics sitting at the outdoor tables, whilst others opted for the warmth of the Village Hall. Charles Hanson (well known for his appearances on television programmes such as 'Bargain Hunt') and his colleague, Vanessa Savage, were kept busy throughout, and the local photographic and memorabilia displays received a lot of attention and comments. The Farmers' Market had quite a number of visitors - the stall selling hot food had more than most, but not too many people bought ice cream! 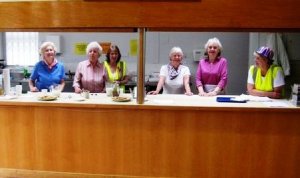 (Gweneth, Liz and helpers get ready to serve refreshments)

The organisers would like to thank everyone who provided material for the displays, the children's games and entertainment; the local Guide and Scout groups for their involvement, and everyone who volunteered their time to help make the events a success.

The Parish Council, in turn, would like to thank the organisers, Cllrs Gweneth Cane, Liz Chmara and Elaine Fletcher, without whom these events would not have taken place.

Once again, the Parish Council has arranged for hanging baskets to brighten up the village during the summer months, and, this year, to mark the Queen's Diamond Jubilee, there is a red-white-and-blue theme. Thanks are due to the various businesses which have agreed to make a contribution towards the cost. There are eighty-one baskets in total at various locations around Keyworth, and these will be kept watered throughout June, July and August. Let's hope that we eventually get some sunny weather to make the summer scene complete.

At the meeting on 25th June, Tony Wells was co-opted to fill one of the vacancies on the Council.

A decision has been made, following talks between County Cllr John Cottee, Parish Council chairman, Tony Grice and the County Council, that some street lights (97 of the 450 originally switched off as part of the County Council's energy saving initiative) will be switched back on around bus stops, road junctions and various thoroughfares in Keyworth. It should be borne in mind that not all lights will be switched on in these locations, but it is hoped that the measures agreed will go a long way towards alleviating the concerns expressed by some residents.

At the Annual Parish Council meeting on 14th May, Cllrs Tony Grice and Liz Chmara were re-elected as Council chairman and vice-chairman respectively. Also, a number of changes were made with regard to committees and the Council's representatives on local organisations – click here for details of who's who, and who'll be doing what in future.

Focusing on the Neighbourhood Plan 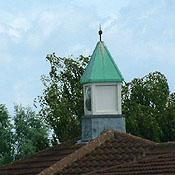 The Annual Parish meeting, chaired by Tony Grice, the Parish Council chairman, will take place in the Centenary Lounge on Monday, 30th April, starting at 7.00pm. As usual, the meeting will be an opportunity for residents to ask Councillors questions and, so that considered responses can be given, it would be helpful if questions could be submitted in advance, by letter or email to the Council office, prior to 24th April.

Click here to find the chairman's written report for 2011/12.

This year, the Council would also like some input from residents concerning one very important issue in particular. The Core Strategy in Rushcliffe Borough Council's Local Development Framework proposes that at least 450 new homes should be built around Keyworth by 2026 and this would, in all probability, mean development on some part of the green belt. The Parish Council is working on a Neighbourhood Plan, and is in the process of identifying possible sites for the new homes. No decisions will be made without public consultation and, at the Parish meeting, the Council would like residents to participate in an exercise which would form part of that process. Please come along and take part if you can. 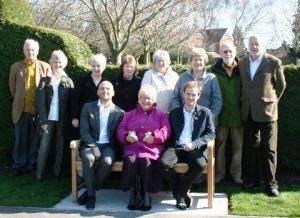 Parish Councillors past and present, Council staff and family members were at Wysall Lane Burial Ground on 20th March to to dedicate a bench to the memory of Mick White, the former groundsman who died in November. The bench is inscribed as follows: "In memory of Mick White who lovingly tended the Burial Ground for so many years". Council chairman Tony Grice paid tribute to Mick, commenting that he had done a wonderful job looking after the Burial Ground and various green spaces in Keyworth for more than thirty years, and adding that he was, above all else, "a thoroughly nice chap".

Residents may have noticed a new item, Keyworth Special Expenses, on their council tax bills. This relates to the amount charged back to Keyworth by the Borough Council in respect of the maintenance of the churchyard. Click on the following link for further details:

Further to the item below, a Parish Council certificate of merit has now also been awarded to Bernice Pettipher who was unable to attend the Council reception. Bernice did an excellent job as editor of the Keyworth News for thirteen years, and has also been involved with Keyworth Girl Guides and Brownies for many years. Many residents will no doubt wish to join us in thanking Bernice for her hard work and commitment.

At the Parish Council reception on 23rd March, the Council chairman, Tony Grice, presented Doreen Gee with flowers and a framed Parish Council certificate of merit in recognition of the thirty-seven years she has spent organising coffee mornings and lunches for senior citizens in Keyworth. We are sure that many residents would wish to join us in thanking Doreen for such sterling service to the community. The Council will, in all probability, be inviting nominations for further awards prior to next year's reception. 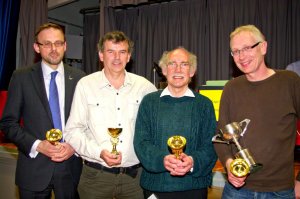 Congratulations to the winners, and thanks to the organisers.

Subject to approval of terms of reference at the Annual Parish Council meeting in May, the Council has agreed to change its committee structure as follows:

Unlike the advisory committees, the Facilities committee will have delegated spendng powers and its meetings will be public meetings. There should accordingly be greater transparency, with more Parish Councillors involved in decision making at committee level.

Please watch this space for further details in due course.

Having already decided that there should be no increase in the 2012/13 precept (the amount it claims from Rushcliffe Borough Council to cover its net expenditure) as compared to 2011/12, the Parish Council agreed at its meeting on 16th January that the precept should, in fact, be marginally reduced in line with a reduction in the council tax base for Keyworth. As a result, there will be no increase in the Parish Council element of the council tax in 2012/13.

It seemed like a good idea at the time...

In December, the Council took delivery of a Christmas tree, kindly donated by Balfour Beatty, the company which has been working on the A46 improvement scheme. The tree was planted outside the Village Hall, and it was felt that, given a couple of years' growth, it might be sufficiently imposing to serve as the focal point for the Council's annual Christmas celebration, hitherto held in the square. It seemed like a good idea at the time, but, sadly, before the new year had dawned, the tree had been vandalised, and the damage was such that there was little option other than to dispose of it. If the culprits had been out celebrating, we can only hope that they felt some remorse when they woke up the following morning. The Council is not proposing to obtain a replacement tree.